Your Kids Won't Learn to Drive, and Here's Why 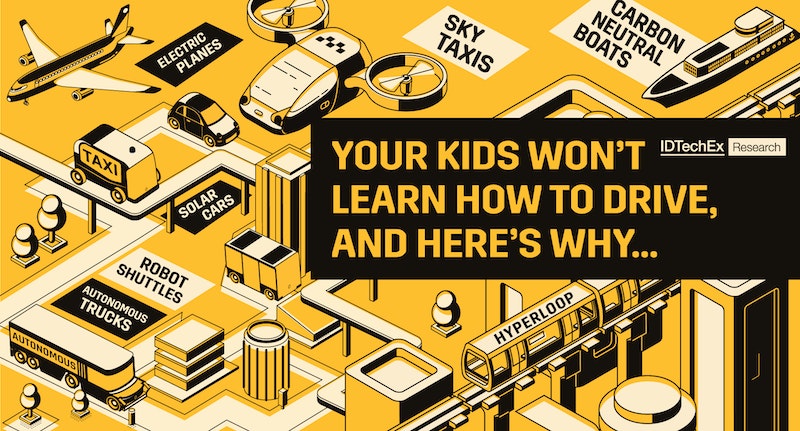 Learning to drive is a coming-of-age moment many kids (and parents sick of being taxi services) dream about. But all of this - the tears, the tests, the parallel parking - could become relegated to the realm of nostalgia alongside VHS tapes and flip phones.
This is due to the massive focus on automation sweeping the personal transport industry.
There are five levels of automation in land vehicles:
1. Driver Assistance (DA) - handsorfeet off
2. Partial Automation (PA) - handsandfeet off
3.ConditionalAutomation - eyes off. The driver can take their eyes off the road in autonomous modes during defined scenarios (e.g. traffic jam pilot) but needs to take over control after system alerts.
4.高自动化——头脑。车辆可以drive autonomously without human intervention except under extreme scenarios. In most cases, the driver can be 'mind-off', e.g. they can sleep during the journey and there is no take-over request for the driver.
5. Fully Automated- driverless. The system can drive autonomously without any human intervention under any conditions. The end goal for robot shuttles.

It is worth noting the difference betweenrobot shuttlesandrobotaxis. Robotaxis are autonomous cars (level 4 or 5) intended to replace many cars and taxis by being more affordable to own and use and available to more types of customer. Cheaper, widely available cars with reduced need for high focus and the use of hands and/or feet would make personal transport more accessible for disabled people, and a potential peace of mind for worried parents watching their teens drive off for the first time.
Robot shuttles, on the other hand, are box-shaped road vehicles designed for slow-speed, multi-purpose city use. It is expected that people will use them rather than buy them. Because robot shuttles are zero-emission, compact and multi-purpose, the possible future they present is one where there are no private vehicles in city centers: accessible, electric, fully automated transport would ease congestion and eliminate the need for private car ownership within cities. They are intended to help to solve the problems of road safety, congestion, expense, emissions, and lack of suitable vehicles.
Robot shuttles are already in action - 37 types in 15 countriesas quoted by IDTechEx.Baidu, China's answer toGoogle, is working with Chinese bus-maker King Long to build buses, called Apolong based on its Apollo design. In 2018, it made and deployed 100 of them in over 30 Chinese cities. The buses can seat 14 passengers, but there is no driver's seat or steering wheel. Apolong comes with level 4 autonomous driving capabilities, which do not require a driver within a specific geographic area, according to the National Highway Traffic Safety Administration (NHTSA). The company also announced updates to its self-driving platform, called Apollo.
Aurrigois conducting many driverless pod trials. One such trial involved blind veterans in Brighton as part of an exercise to explore possible 'first and last mile' transport solutions. The company joined forces withBlind Veterans UKto develop a six-month programme of testing that started in April 2020. This was the first time Aurrigo has ever conducted an extended trial with veterans or people with a disability, and the results indicated an overall positive experience for participants, including reduced travel anxiety.

The updates to cars may be expected, but what about the roads themselves? Smart Cities could mean roads that generate solar electricity, and even charge electric vehicles through the road surface, as well as interact with autonomous vehicles to direct traffic and present congestion.
A project for this concept currently underway isToyota's 'Woven city' in Japan. The city will be designed with three different types of streets: one for self-driving vehicles, one for pedestrians using personal mobility devices like bikes, and one for pedestrians only. The rooftops of buildings will be covered inphotovoltaicpanels to generate solar power and hydrogen fuel cell power, and all around will be native vegetation grown using hydroponics: a method of growing plants without soil.
A fleet of Toyota's self-driving electric vehicles, called e-Palettes, will be used for transportation, deliveries, and mobile retail throughout the city.

From the roads to the skies

What vision of a sci-fi future is complete without flying cars? The concept of air taxis is not quite the flying cars ofBack to the Future; in fact, air taxi services with vertical take-off and landing are not a new concept. Helicopters have been certified for civilian passenger transport since the late 1940s, but have always remained an expensive and niche form of transport. Recent advances in electricbatterytechnology and electric motors, however, have facilitated the design of these aircraft with distributed electric propulsion (DEP) architectures that can alleviate a number of the issues which have prevented helicopter transport from becoming more widespread.
Air taxis could offer an advantage for cross-city trips in cities which lack existing transport infrastructure, or between cities which are relatively close by but have no direct transport links, for example between Cambridge and Oxford.
A leading air taxi manufacturer isJoby Aviation, who recently took over the hugely influentialUberElevate program.

亚博体育's latest report on "Autonomous Cars and Robotaxis 2020-2040: Players, Technologies and Market Forecast" forecasts that autonomous cars and robotaxi services will become a $2.5 trillion market by 2040. For further analysis on the potential and pitfalls of the Smart Cities Market, please visitwww.IDTechEx.com/smartcities, and for an investigation into and their key enabling technologies, see the report "Air Taxis: Electric Vertical Take-Off and Landing Aircraft 2021-2041" at{www.亚博体育IDTechEx.com/airtaxi.
IDTechEx's team of expert analysts track emerging technologies over time, building extensive personal networks within the industry of study and supporting customers using these connections. Any report purchase comes with a minimum of 30 minutes "analyst time", with customers also having the option to subscribe on an annual basis to IDTechEx's research by topic. For more information about the benefits of IDTechEx's reports, or for specific questions, please contactresearch@IDTechEx.com.
IDTechEx guides your strategic business decisions through its Research, Subscription and Consultancy products, helping you profit from emerging technologies. For more information, contactresearch@IDTechEx.comor visitwww.IDTechEx.com.